Can the Recent mild improvement prove sustainable and is the market really 25% overvalued?

This FNB House Price Index release comes at a time when something of a mild storm appears to be raging in the residential industry as a result of the release of the recent Rode and Associates Report which claims the residential property market to be about 25% “overvalued”. This, we interpret to mean that it would require a very significant decline in house prices in real terms in order to get back to what Rode deems to be an “appropriately priced market” that would be in “balance” or “equilibrium. Needless to say, many industry players are, rightly or wrongly, seemingly unhappy with the statement. It has been the focal point of the past few days, and we have been questioned frequently about it.

Perhaps some people have over-reacted to the report a little, as Rode is not predicting a sudden downward price correction. Rather, he expects a gradual real price decline over some years. Nevertheless, the fact that it has grabbed the attention of the industry suggests that it is worth debating.

Our own opinion is that it would be extremely difficult to ascertain as to by how much the market is “over-valued” or unrealistically priced, and that in any case, the equilibrium price level (if one could determine it) is very much a moving target, fluctuating frequently as economic fundamentals change.

The Rode methodology. It is essentially what we would call a “technical analysis” as opposed to a fundamental analysis. A long term real house price time series is calculated using average house prices and average building costs.

Therefore, according to the theory as we understand it, real house prices, as calculated through deflating nominal house prices with building costs, should move in the broad sideways band over the long term. If the real price level is significantly above the long term trend line, as is currently the case when using 1966 as a starting point, the theory is that the market is “overvalued”, and the current Rode estimate that it is overvalued by 25.

We have some reservations about using this methodology.

Firstly, while the theory could indeed work under the assumption of totally elastic supply of new homes as required by the market, we are no longer convinced that such elasticity is a reality in South Africa any more.

Cape Town, for one, has a relative land scarcity for property development (especially around the mountain), which keeps its average property values above those of Joburg in spite of Joburg having higher average per capita income (and thus higher purchasing power).

As urbanization continues, one would expect land scarcity in our cities to increase. Theoretically the landlocked cities could continue to sprawl, but it would be the increasing urban congestion and infrastructure constraints that make this increasingly impractical.

Therefore, we believe it conceivable over the long term that real house prices can increase significantly, and that South African cities can and will become far more expensive places to live as time goes by, and indeed we believe that this is already taking place.

Our second, and key, reservation with the Rode approach, however, is that when using long term trend lines to determine whether a market is under or over-valued, one can literally pick your starting point to “prove” whatever theory you wish. A different starting point to determine the long term trend produces entirely different results. Start in 1966, as Rode does, and real house prices are indeed above the long term trend. Starting in 1995, and one could state according to this theory that the market is undervalued. If we had data for a few decades prior to 1966, who knows what the long term trend line would have looked like as a result of SA having come through an Anglo-Boer War, two world wars and a Great Depression? 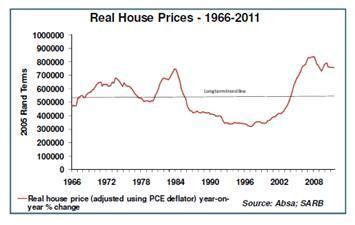 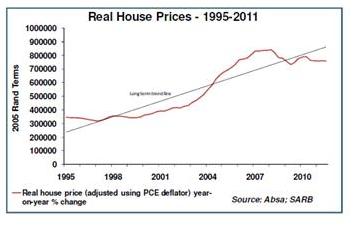 So there we have it, a good graph for the property bears as well as one for the bulls (which is what one would expect from a two handed economist I guess). Take note that we are not claiming either of the above graphs to be the correct one.

The third and final consideration with regard to using a long term real average house price trend is that the average house of the mid-1960s is different to the average house of today. Real property values have risen significantly since the mid-1960s but will not necessarily wholly be seen in an index depicting the average house price. The market does not only adjust to real house price surges through a subsequent downward correction in real prices. Real per square metre existing property values can remain permanently higher if land scarcity remains permanently higher, with developers providing smaller homes on smaller stands (as opposed to flooding the market with the same sized units as in previous years).

Indeed, this has been the long term trend. As land scarcity has increased, so average stand size of new homes has diminished dramatically. Over the past decade, full title homes that our valuers have valued that were built between 1970-1974 had an average stand size of 1,063 square metres. By comparison, homes built from 2010 to date had seen their average stand size almost halve to 557 square metres. Over the same period, the average size of a home built had dropped from 203 square metres to 150 square metres.  Less “frills” were also the order of the day. Whereas 69.3% of homes built from 1980-1984 had garages, this had declined to 53% by 2010. Percentage of homes with swimming pools had declined from 40.3% of those built between 1975-1979 to 7.3% by 2010+.

Therefore, when analyzing real house prices since 1966, one may well draw the conclusion that the long term real price trend line from that point is more-or-less flat, or has very little rise over time. However, if we could calculate a price index that adjusted for declining stand size/home size and level of luxuries, we would see more of a rising long term real price trend line. Because over the long term, as urban land becomes increasingly scarce, real prices are indeed rising. The real values are staying permanently higher over the very long term, and the development sector is adjusting by providing smaller and less luxurious homes as time goes by.

Conclusion
So are house prices overvalued by 25%? We can’t contradict the statement. All we can say is that we believe that it is not possible to say.

However, while we have stated the belief that urbanization in SA should bring about significant long term increases in real property values, we must distinguish between the long term, and the ‘shorter” term. The long term move to higher real property values doesn’t happen in a straight line, but rather in big cycles driven by shorter term fluctuations between supply and demand.

And indeed, in the near term we are also of the opinion that real house prices will decline further.

Our reasoning is somewhat different, however, and based on our perception that the market is unbalanced at present, and that the economy (and thus residential demand) looks likely to be weak in the near term, and that our own indicators of demand versus supply still point to an unrealistically priced market.

But how far the real house price decline will go is tough to call, and will depend very much on the world’s and South Africa’s ability to turn things around and get back to a respectable longer term economic growth path in the coming years.