The pie graph shows the distribution of claims by claim type for the 2011 year of insurance as at 30 June 2012. 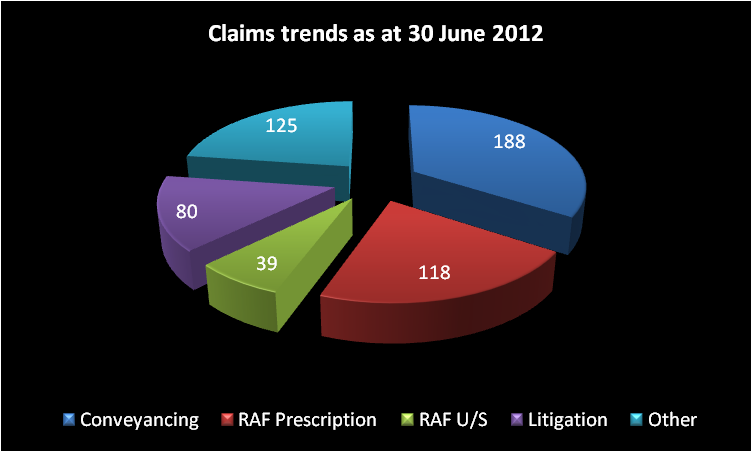 T his table compares the numbers of claims per claim type registered in the first twelve months of the past 5 years.

There is a 32% increase on the total incurred value* for the same period in the 2010 year (*This is the sum of the amounts reserved and payments made.).

Please see our article on the Unauthorised payments of trust money in the February Bulletin (1/2012).

Conveyancing-related claims in other jurisdictions
According to an articIe by Catherine Baksi, which appeared in the Law Society Gazette on 10 September 2012, in the UK around 50% of the value of all professional indemnity claims against solicitors currently arises from conveyancing matters. Over the past few years, between 6 and 16.5% of claims arose out of mortgage fraud.

Looking at the claims statistics in the Australian publication LawCover around 41% of their claims arise from conveyancing matters (mortgage and lending and property).

Other claim types
The percentages of claims in the other claim types shown in Table 1 remain fairly stable. However, there is an increase in the numbers of claims arising out of general prescription (43) which forms part of the “Other” claim type.